2. Waco  (Limited-Series) 2020  We all know how it ends, still absolutely worth watching, Co-Stars and Produced by Michael Shannon (Oscar-Nominee, Revolutionary Road).

4. Fun with Dick and Jane (Movie) 2005  Jim Carrey and Tia Leone are hilarious in this comedy about how far Dick (Carrey) will go to keep his family afloat after being laid-off by corporate-swing Alec Baldwin.

5. The Patriot  (Movie) 2000  Starring Heath Ledger and Mel Gibson, a wonderful epic set in the American Revolution, It has stunning Cinematographer from six-time Oscar-nominee Caleb Deschanel and a brilliant performance by Heath Ledger before he was Heath LEDGER.

6. Nobody Speaks: The Trial of Free Press (Movie) 2019. Set around the Hulk Hogan leaked sex-tape. This documentary examines the “danger” free speech is in. It is not a depressing documentary, it is fascinating and relevant.

7. Mississippi Grind  (Movie) 2015  This is why they say “I found a gem on Netflix!” Ryan Reynolds is a Gambler stuck on the trails with a truly “degenerate” Gambler. The camerawork captures the road and the Midwest/South perfectly. I am bias, my friend Jimbo Mathus has a cameo as a drummer he is an all-around musician, artist, friend also Grammy-winner although he’s known as a front-man who plays guitar.

8. Click  (Movie) 2015 Stars Adam Sandler.  Yes, maybe most of you saw it and ask why this? Well, the premise is a man who has a remote to fast-forward or re-wind life, it is May 4th 2020? Need I say more. If you look past being “you know comedy, but are not funny” (yes, ironic); there is a GREAT philosophical message in this film. Also, a funny co-starring role by the one, the only Christopher Walken.

9. 40 Days and 40 Forty Nights (Movie) 2002. Josh Hartnett must go forty days and forty nights without sex. This was back when Hartnett was at his PEAK of “women went banana’s” for Hartnett. It is a hilarious movie, that gets funnier after 9 p.m.

10. When They See Us  (Limited-Series) 2019. Ava DuVernay’s master-piece about the Central Park Five (now known as The Exonerated Five), who were five Black teen’s accused of and wrongfully convicted for murder and rape. This show is not film, movies or television it is CINEMA in the form of a Limited-Series. 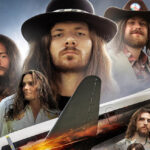